Home Education Overcoming The Hurdles: 3 Liberians With Disabilities On Their Success Stories

People living with disabilities are usually marginalized in societies, such as Liberia, and are therefore subjected to conditions that reduced them to mere beggars. Often, they are laughing stalks and are humiliated because of their situations in developing societies.
Yet some use these debilitating conditions not as a weakness but as their strengths to aspire to and ascend to greater heights of achievements in some cases over those who are not affected by disabilities. Three of such outstanding Liberia PwDs are Professor Dr.  Mogana S. Flomo Sr., Madam Makula Dulleh and Mr. Christopher Jappah, all of whom, though physically challenged, have achieved higher levels of human capacity and have therefore enjoyed grave respect and are competing with their peers who are not in these conditions.
Dr. Mogana S. Flomo Sr. 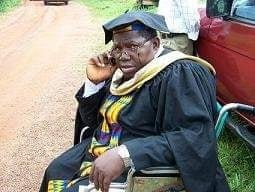 Flomo: Making dream come through:
Born and raised in Gbarnga, Professor Dr.  Mogana S. Flomo Sr. explained, the author of the book: “From Dust to Prominence: a story of the physically challenged African” related his experience with his unfortunate situation of disability which certainly depicted the title of the book he authored.  The Liberian Chemist started his story with a time in his life at five years old when growth was discovered on his head, for which he was taken to Forkpelleh District for treatment.
Dr. Flomo, speaking with our reporter in an interview, said he was given an injection by a nurse and after that, his body turned norm and since then he became disable as first crawling on the ground and later start to sit in a wheelchair, making him lost the hope of not being a part of society and making his dreams for education to seem tasteless.
His hopelessness became an obvious epitome of people living with Disability who are often presumed marginalized and discriminated against, a situation that makes it difficult for many of them to get quality education, better health care and to be selected on the job market, thereby giving them thought complete abandonment in society.
In the world of people living with disabilities, reliance on other service-providing organizations responsible to attend to disabled people is highly visible, and those organizations are daily crying on the government and the donor community to see a need to increase funding for increased care or to create programs to help them, considering that the challenges in the disabled community are uncountable in society, as many struggled their way up the social ladder to succeed in life.
But as it is said that “disability is not inability” the case of Dr. Flomo explained the confirmation of this fact in Liberia, where people living with disabilities represent 14% of the country’s total population, according to a local organization in Liberia, Humanity and Inclusion.
“My parents rejected my proposal to attend school, saying that it will be useless for them to spend their money on me. However, my sister convinced them was to send me to school, even though they still considered me a curse or witch in the family.”
In his situation of disability, Dr. Flomo started school in 1968 at the Forkpelleh public high school in Forkpelleh District Bong County, where he said he could though write letters but was unable to speak English which made it difficult to associate with his friends who saw him as a witch.  Consequently, he had to stay on campus without seeing his family during vacation; and due to his condition, no one wanted to walk with him in a long-distance while he is crawling.
“My first day in school I told my teacher: I in two grade, instead of saying “I am in 2nd grade”; and because of that the students laughed at me all the time on campus. I did not understand when they were speaking, but I would see them laughing at me when passing and saying two grade,” he further explained.
In the midst of his dilemma, he completed high school and enrolled at the Cuttington University in Suakoko Bong County, where he graduated with a bachelor’s degree in Chemistry, making the dream of becoming a doctor come to pass.
Professor Mogana Flomo is the author of the book, “From Dust to Prominence” a story of the physically challenged in Africa.  He also established the Galaquomon Disable Association, the first disabled group in Bong County, and also served as president of the National Disabled Union of Liberia established by-laws and the constitution.  The organization under his leadership, according to him, was able to empower 11 disabled members who attended Cuttington University.
Dr. Flomo, the man who was assumed to be a witch or cursed child in his family, disclosed his portfolios which indicate services at various institutions, including his present position as the Director of Research and Institutional Development at the Bong County Technical College in central Liberia. Before then, Dr. Flomo served in numerous capacities at various institutions, namely the position of Director for Human Resources at the Bong Technical College; the Liberian Children’s Schooling Project also as Executive Director. Dr. Flomo is also Dean for the Business College of the Cuttington University and many others positions as a disabled person.
All of his services, he said, were performed efficiently and effectively due to the solid academic credentials he possesses.
Married with seven children, the Liberian physically challenged educator encouraged others suffering similar disability conditions to see themselves as humans capable of reaching the height of human undertakings, instead of seeing themselves as sub-human dependent on begging.
He said people with disabilities should use the skills they have to empower themselves and their families, noting that the only way a disabled person can succeed in Liberia is when she/he gets educated.
Madam Makula Dulleh
Like Dr. Flomo, another 31-year-old physically challenged female, Makula Dulleh, who is a 2019 graduate of the University of Liberia with a Bachelor’s Degree in accounting, also relates her story.
Experiencing disability from birth, she said her reason for seeking higher education is to discover the values of being a disabled educated person. 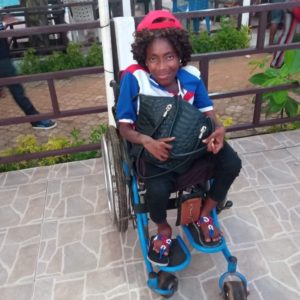 “My zest for education is to impact other disabled people in Liberia by giving them hope and also helping them know who they are in the society.”
She explained that her upbringing as a disabled person was bad, because she was considered a ‘nobody’, and was rejected, which of course motivated her to fight for education.
Madam Dulleh added that the issue of rejection by friends and family members has pushed other disabled people to the streets to beg.
But she believes that her ability to beat the odds would inspire other physically challenged people in Liberia to follow her example and those of others like her who have not allowed physical disability to define their future.
Christopher Jappah-Overcoming deafness: “The Journey is not over yet”
Christopher Jappah, another disabled person who has surmounted the setbacks of his condition. Born and reared in Liberia, he attended the Calvary Baptist Church school system.
He became deaf at the age of 8 and grew up reading lips, causing his family to take him to the United States of America to seek medical treatment, where he completed his high school education. 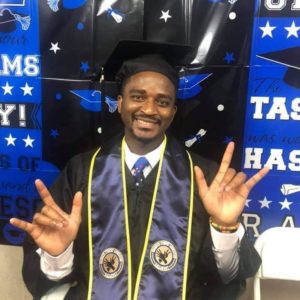 This proud Liberian PwD graduated from Gallaudet University in 2021, with a Bachelor’s of Arts Degree in Business Administration and a Master’s Degree in Public Administration.
Recounting his aspiration, he said is to his dream to help the disabled community in Liberia, especially the deaf and dumb community. This he said inspired him to press hard for his education by attaining the high educational level he has now acquired.
Mr. Jappah said one of the biggest challenges he faced growing up in Liberia was not being able to understand his teachers during lectures when he had to sit at the front of the class to read teachers lips, but added that it was also always hard because some teachers move their lips different. According to him, he faced the same challenge during his early days in the United States.
“The journey is not over yet because I am still pushing myself to help disabled people back home, because I am a victim when it comes to ignoring disabled people in Liberia.  We Deaf people are called “bobo” to refer to dumb, which is disrespectful to us. We are in the 21st century, so why continue to use words like dumb and boboe? We are deaf but not dumb. This is sad because disabled people are humans. We are all equal despite our disabilities,” he lamented.
He spoke about the passion he has for educating people and bringing equality to the disabled community in Liberia and also giving disabled people the opportunity to have a better education and job just like everyone. Christopher is now sponsoring deaf children in school and encouraging them that education is key to a successful future.
He has also established a football team to help promote disabled children through the beautiful game.  Christopher is working with the US Department of Air Force as a youth program assistant, also his 6th year as an assistant coach for Gallaudet University men’s soccer team.
Paving the way for other PwDs
Contacted during the course of developing this story, the Deputy Director for Administration at the National Commission on Disabilities Fallah Boimah expressed appreciation for those disabled people who are paving the way for others to follow.
Rev. Biomah said the budget given to them by the government of Liberia is very low to even pay their staff, noting that due to the COVID-19, donor organizations have minimized their support to the commission thereby making it difficult to put their plans for 2021 for the disabled community into action.
One billion people of the world’s population experience some form of disability, People living with disabilities in Liberia are discriminated against daily. Liberia has therefore adopted policies and legal frameworks to ensure the rights of PWDs are respected and protected, with one of the main commitments signed by the Liberian government being the UNCRPD in 2012, although the government is yet to ratified its Optional Protocol.
The National Commission on Disabilities was established by the Act of Legislature 2005 to supervise, monitor and ensure the wellbeing of PwDs. The Act which also creates three seats at the National Legislature, three persons to head the Bureau of Special Inclusive Education Division at the Ministry of Education has not been implemented.
Disabled organizations in Liberia are still hoping that there will be a Representation at the National Legislature to ensure treaties that are signed for Disable people be implemented by the government, until that is done disable people see themselves as unrecognized citizens in the country. Publication of this article was made possible with support from Internews Liberia Inclusive Media Project.