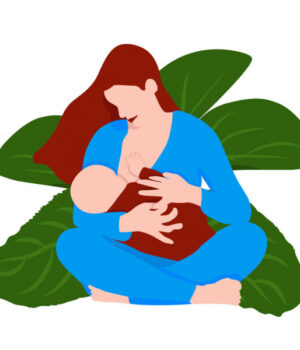 True: It is established that breastfeeding will reduce the chances of getting breast cancer because hormones stimulated by such action.
Social media users specifically Facebook have shared a post that suggests “Sucking breast prevents breast cancer, especially when it sucks daily vigorously and roughly, morning and night,” the post generated comments from both males and females.
There was an argument on who is sucking the breast whether it is a baby or a spouse of a woman.

We found that although a lot has been written on the level of truth of this claim, The Stage Media spoke to Dr. Mosoka Fallah, a public Health specialist said there are pieces of evidence that shows a strong correlation between women who do not breastfeed and the incidence of cancer

“If people understand the biology and the nature of breast milk to a baby they will understand that it is a fundamental need for our human race, In fact, the name of God YAHWEH laterally means the many Breasted God to symbolize the very protection, survivors that the young babies have from break milk though am a scientist but am religious so not breastfeeding is disobeying the fundamental nature of God for humanities and mammals that is why we are called mammals from the word Mammary gland,” He said.

The claim has been misunderstood by some commenters on the post

Dr. Alieu Mohammed said, “What we know about the breast being sucked is for babies because there is evidence for mothers who are able to breastfeed their children have reduced risks. Even in this case, we cannot say necessarily that it prevents breast cancer. What we can say is that the risks are reduced for women who breastfeed.”

A Ghanian media outlet published an article stating, “A BBC report suggesting that breast sucking by men and women can reduce the risk of developing breast cancer for both sexes is generating mixed reactions from the public.”
Also, another media outlet published similar
According to the Center for Disease Control (CDC), breastfeeding lowers the risks of developing breast cancer in mothers.
Fact Check: True: sucking breast prevents breast cancer, especially when it sucks daily vigorously and roughly, morning and night but having your partner suck on your breasts will not prevent or reduce the chances of breast cancer.

No, DNA Equipment Is Not the First Time to be Installed At JFK

Governments not transparent when detailing their Covid-19 spending