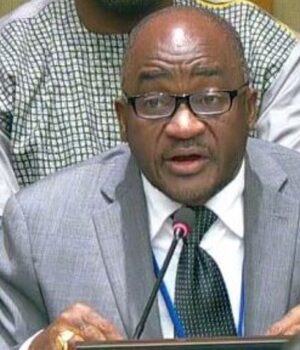 Kemayah appeared before the Liberian Senate Committee Foreign Affairs on the 28th of June, 2022, to discuss Liberia’s foreign issues with a focus on the student community in India said due to the limited budgetary allotment, the country is unable to sustain its diplomatic offices aboard, thereby leading to either shut down or nonfunctional.

The appearance of the Liberian Minster was based on numerous complaints from students in foreign countries including India.

Additionally, his summon before that august body was also due to The Stage Media (TSM) May 18, 2022 publication highlighting the challenges Liberian students faced across India as the result of the closure of the country’s diplomatic office.

In his response, the Foreign Minister said, “The situation concerning Liberian students and citizens in India is just the latest of the long chain of problems affecting Liberians aboard.”

Even though the Minister could not straightly address the issue of the Consulate General that will ease the passport renewal saga or resolve the problems the student community is being faced with in India, he, however, said that the government through the Ministry of Foreign Affairs attaches importance to challenges Liberian students are faced with outside the country.

Kemayah said, “This situation did not begin today as we attach importance to addressing the problem. In the recent past, Liberia had a diplomatic mission in India, Kaya, and other places, but these missions were shut down due to economic reasons and others factors.”

He also told the Senate Committee on Foreign Affairs, “Currently, Liberia has a diplomatic mission with India notwithstanding, that fact that we do not have a residency diplomatic mission like before does not stop our relation with the country; based on this relations, several Liberians have gone to India either for study, medical attention or other reasons that are beneficial to those Liberians that are going to the country.”

The Minister indicated that due to the strong relationship bonds between the two countries, Liberians are studying living, or seeking medical attention and other important things they want to attain in India and that those purposes to the best knowledge of the Liberian government have always been safely guided and protected by the security system.

“We are aware also that there are some challenges these Liberians faced while in India, but they have not been abandoned to their fate. Liberia through the Ministry of Foreign Affairs remains very much committed toward ensuring the protection of those citizens,” Kemayah assured.

Kemayah told the Committee, “It is unfortunate that our Honorary Consulate, who handled Liberians interest died of COVID-19 and has not been replaced, however, efforts are on the way to ensure such replacement. Let me be quick to point out that part of the reform, regulation relating to the honorary consulate has been revised,

“I am very much confident that by the middle of July, we will submit the revised copy to the Senate that was put together by the Ministry and the senior team for input and send it to the President for approval and launch that will address many of those challenges faced by Liberia diplomatic offices.”

He said informed the Committee that the Ministry is in contact with the leadership of the Liberian Student Association and others students as it relates to issues in that area.

Kemayah named 17 Liberian students who are studying in India on Bilateral State Scholarship based on scientific and educational cooperation agreements signed by the governments of the two countries.

Similarly, to the foreign partner, the Hungarian side offers scholarships for foreign students, researchers, or lecturers in higher education institutions or scientific or art institutions.]

“It is important to also mention that it is estimated that 320 self-sponsor Liberian studying in India went there without the involvement or knowledge of the Liberian government”, he said.

It can be recorded that Liberia’s diplomatic mission in India came to a shutdown on June 4, 2021, after the death of its Honorary Consulate General, Dr. Ankur Bhatia.

Since his appointment in 2016, the late Dr. Bhatia according to our investigation operated the country’s diplomatic Mission from his private Roseate Hotel & Resort.

The Stage Media (TSM) investigation unveiled that even the staffs who worked with deceased Liberia’s Honorary Consulate General were all Indians making it increasingly difficult for Liberians in India to freely communicate with them.

When he was serving in that position, Liberians had difficulties smoothly reaching out and now that Dr. Bhatia is dead, the situation has become compounded-complex thus creating more difficulties for Liberians in India leaving a huge effect on the student community.

The issue of visa passports renewal is some of the many challenges being faced by students, and those are efforts expected of an Honorary Consulate General of any country.