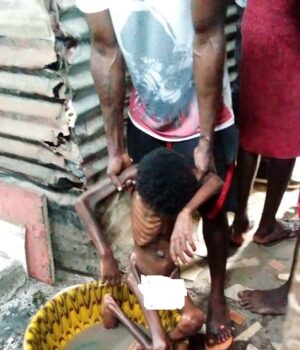 It was a sad day in the Palm Beach community, ELWA Beachside, Paynesville, on Sunday, February 14, 2020, when residents discovered the almost lifeless body of 11 years Jeremie Brown who was  kept in a zinc shack by both his stepmother and biological father without eating nor drinking for “three weeks.”

According to residents, since July last year, they have seen little Jeremie with his father Emmanuel Brown and stepmother only identified as Wanee in the neighbourhood or he was often with other children playing but the child suddenly disappeared.

“We heard a strange creature was coming out of the Brown’s home, so we all went to see what the creature was, to our surprise, it was their son.

Hawa explained that the child was seen crawling from his home but his stepmother pushed him back to avoid neighbours eyeing him.

caption: Home of Emmanuel Brown and his family in the Palm Beach community

“The lady who saw the boy crawling from the home stayed back because she was not sure of what she saw, so she hid behind the Brown’s home to peek again, Hawa explained.

“Again, this neighbour was not sure if it was a human being, so, she used her phone to take the picture of what she saw, but still couldn’t recognize the image she later carried the picture to the chairman and community members.

Hawa said the Community leaders went to the Brown’s home to inquire what was in his house, “He said nothing.”

Hawa narrated, the community leaders invited the Liberian National Police (LNP) who forcefully entered the house and started searching the house to establish the community allegation, that there was something strange in the Brown’s home.

“When the Police and Community members got in the house, they search all the rooms but were unable to verify our claim. In no time they saw box-like- structure, three pieces of zincs and three pieces of ceiling, the police opened it and saw the little child appeared – helplessly,” Hawa said.

caption: Where the little Jeremie was kept by his father and stepmother for weeks

“When they brought the child outside, fear took over the community residents but that men were brave, they took Jeremie and bathed him. When they tried to wash the child’s mouth, he vomited mattress and plastic that he may have eaten due to hunger,” Hawa explained.

His last words were “I want to drink,” with no time, he passed out in the Men’s hands while he was being bathed.”

“It was God who wanted to expose their evil-doing before the child could die because he has spent all those long days in the house without dying why just the day he was discovered he passed?” Hawa questioned.

She furthered said, when the child wasn’t seen in the community, his peers and adults inquired from the dad, but he responded that the child had returned to his mother to spent time, “Not knowing that boy was in the house starving from hunger.

How Little Jeremie Came to Montserrado

Mama Cole, 32, mother of the deceased said, she and Emmanuel spent 10 years as husband and wife, but his mismanagement of funds led to their divorce.

With teary eyes, she said, “Emmanuel and I have three children and after the break-up in 2016; I took the children to my family in Grand Bassa where they have lived from 2016 – 2020  surprisingly, he (Emmanuel) requested the child to come to Montserrado to live with him.”

“He convinced me that Jeremie being our first child is his favourite son so, after so many conversations, I was able to send the child to him in July 2020.

“Despite our son with his dad, I usually send food money and come to town to see him but when I got pregnant, I had to sit down because I was consistently sick,” She said.

Hawa recalls, their son (Jeremie) is a lover of foodstuffs, so she regularly sends the father money to enable him to get what Jeremie likes.

“My son loved foodstuffs, I usually send money for them to buy foodstuff for him at which time I can add money there for his stepmother because I know that she is the one taking care of him,” Mama said.

Mama said, “Even though I was not coming to town, but I always called to know how my son was doing whenever I called his father will usually tell me that the boy is fine but he (Emmanuel) is on the sea or the child is asleep.”

“Even last week, I called but Emmanuel told me that he was on the sea so I requested that I wanted to talk to my son when he gets home because it had been a very long time I haven’t heard his voice but when Emmanuel got home he told me Jeremie was at sleep and that was it,” She said.

Mama said she tried to establish as to whether the information was factual from Emmanuel, but he didn’t answer.

“In no time, I received a phone call from a friend telling me that my child was dead.

“Everything happened very fast that I was not even willing to believe any of that information, so I called my family members and we came to Monrovia and before my eyes, I met the inhuman behaviour- that led my 11 years old child to his early grave,” she cried.

Emmanuel is currently in Police custody at ELWA Zone 8 while his wife was released on grounds that she is pregnant and has a child.

Speaking in a very frustrated tone, Mama said “All I want is justice for my son because a human being can not treat an innocent child in such a manner even if he did something wrong.”

She called on the government, human rights, and child rights advocates to ensure that her son gets the necessary justice adding that “the perpetrators face the full weight of the law.”

On February 4, 2012 – President Ellen Johnson Sirleaf officially launched the Children’s Law of Liberia to protect children and their right to participate meaningfully in their development.

The law is one of the most comprehensive pieces of children’s rights legislation in the continent and is largely based on the UN Convention on the Rights of the Child (UNCRC) and the African Charter on the Rights and Welfare of the Child, ratified by Liberia in 1993 and 1992 respectively.

Liberia is one of the first countries to adopt comprehensive legislation for children that incorporates the UNCRC and the African Charter. This new law reflects the government’s commitment to supporting the progressive realization of all rights for all children: including their right to health: education; freedom from violence, abuse, and exploitation; and their right to participate meaningfully in their own development.

Also, the Domestic Violence Act was passed by President George Weah which protects women and children from all forms of Gender-Based Violence.

It is not known what the charges on Emmanuel and his wife will be.

True: The General Manager of Fawaz image appeared on the voter’s list