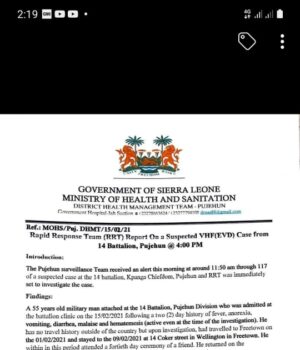 A  Press Release circulated on social media that Sierra Leone has Ebola is False.

The release is from the Government of Sierra Leone, Ministry of Health and Sanitation, District health Management team- Pujehun.

It states, A 55-year-old military man attached to the 14 battalions, pujehun who was admitted at the battalion clinic on 15/02/2021 following a two-day history o fever, anorexia committing, diarrhea, malaria and hematemesis (active even at the investigation).

“He has no travel history outside of the county but upon investigation had travelled to Freetown. He within in this period attended a fortieth-day ceremony of a friend. He returned on 9/02/2021 to pujehun and was relatively fine before symptoms started.”

The Ministry of Health and Sanitation in Sierra Leone has confirmed the release but said the sample of the man named returned Negative.

In its verifications, TSM contacted a source at the Ministry of Health in Sierra Leone and journalists in Sierra Leone, ” The test result states it was not Ebola”.

The journalists confirmed that the release is authentic but there is no case in Sierra Leone.

Awards for excellent reporting on disability (up to $13,000 prize)