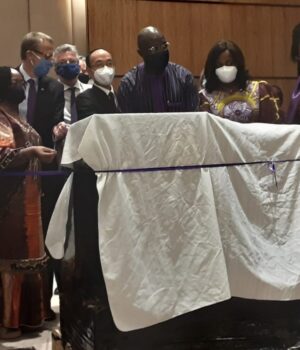 When the Liberian government on March 8, 2021, unveiled the
Deoxyribonucleic Acid (DNA) testing Machine women, girls, and right groups saw
it as a relief and an end to the culture of impunity of sexual violence across
the country.

Both survivors and
advocate grouping felt that the day of justice for such menace has arrived.

All of these hopes seem to be dashed the drain because March 8
of this year will  be exactly a year
since the DNA machine was unveiled in fulfillment of President George M. Weah’s
promise to anti-rape protester.

“Today is a new beginning and it will begin our journey to
revolutionize rape investigation in the country,” President Weah told Liberians
during the unveiling ceremony.

The same period, the President declared rape a ‘National
Emergency’ but has the machine investigated a single rape case as there is a wave
of sexual abuses daily?

James Crayon, John F. Kennedy Medical Center (JFKMC) Public
Relations Officer in an interview told The Stage Media (TSM) that, “those are
very huge equipment and you need to set them up properly before it can be
functional, and that is why we are trying to build a separate facility for the
machines, but for now, the machines are not functional.”

Maminah Carr Gaye, Assistant Minister for children and head of
operations of the Anti-SGBV Road Map established by the president in 2021
informed TSM that Liberia currently has three DNA machines and they all are in
good condition.

Gaye said the machine is not in use because both the Ministries
of Health and Social Welfare are still trying to construct a laboratory at the
JFKMC where the DNA equipment will operate.

“I can confirm to you
that we currently have three machines in the country and these machines are to
be kept in a warmer temperature which the Ministry of Health is working on, so
that is where we are,” she said.

Even though the
government of Liberia through the Ministry of Gender Children and Social
Protection has not provided regular updates on rape cases since 2020, President
Weah in his recent state of the nation
address disclosed a reduction in Sexual and Gender-based Violence (SGBV)cases
in December of 2021, compared to the reports of 2020 December.

Weah said, “As a
Government, one of our priorities is to reduce the incidence of SGBV by 30
percent by 2023, through the provision of appropriate support services and
access to justice systems. I am pleased to report that significant progress is
being made to make this a reality.”

Weah told Liberians through the legislature that traditional and
religious leaders are also beefing up the efforts to change the story and
narratives of survivors and victims, as well as supporting prevention efforts
of sexual and gender-based violence

With the increasing media report of rape cases involving
two-year-old babies among many cases, the Ministry of Gender Children and
Social Protection since its 2020 quarterly report on rape cases across the
country, has not provided updates to the public about statistics involving SGBV
cases.

Montserrado County,
however, recorded 1,073 cases amounting to 78.8 percent of the total number of
cases while Grand Gedeh and Nimba Counties recorded 185 and 167 cases
respectively.

Ne-Suah Livingstone, a
right advocate who is involved in ensuring that many survivors pick up their
lives said DNA machine is a very important factor in the fight against rape but
holds that in the case of Liberia, the machine is not helping as anticipated
concerning the adjudication of cases.

“I have not been able to
get statistics as it relates to facts gathered after the DNA test was carried
on, but what I know is that DNA is something that ought to be used to help
substantiate accusation, especially where pregnancy occurs during rape to
establish whether the alleged perpetrator is the father and this term to relate
to the case as to whether rape did happen and other issues surrounding that,”
Livingstone said.

Livingstone added, “One
machine is not enough considering the counties and local communities, and
because rape cases are increasing daily, having one machine may also slow down
the judge’s decision on cases as he or she has to wait on the result before
deciding.”

Contrary to the reduction in the number of rape and SGBV cases
mentioned in President’s Weah SONA, Livingstone said the cases are not dropping.

“The cases are so many that they have not been adjudicated and
we have to speed up when it comes to rape cases because it is one-way survivor
can easily pick up their lives and the faster we go with cases, the likelihood
that people will get to know that this is not a small crime,” Livingston told
TSM.

Livingstone said the
situation of rape in Liberia is so serious to the point that if the nation does
not stand up most of the girls’ children will be a victim of such a ‘devilish
act.’

It can be called in 2018
at the end of the United Nations Mission in Liberia presented a DNA analysis
machine to the Ministry of Gender, Children, and Social Protection.

The machine was never
been used on grounds that there were no trained Pathologists in the country to
operate the equipment to analyze forensic evidence of rape and aid in the
prosecution of cases.

On June 17, 2019, a
member of the Joint Task Force on Sexual Gender-Based Violence in the country
came up with an official answer as he announced that the only DNA machine in
Liberia has not been effective because it is faulty and needs an expert to
operate.

“The machine was given to the government and it needed experts
who could work with it, but Liberia did not have any Pathologist. The
government sent three people out of the country and only two were successful,”
he said.

Mr. Gabriel added that
even though Liberia has two pathologists to run autopsy, they have not been
able to use the machine because it has Problems.

According to the UN
Report, Sexual violence against women increased by 50% in Liberia during the
pandemic. The Ministry of Justice documented more than 600 reported rape cases
between January and June 2020, a rate close to reaching annual levels.

Fact Check: Liberian Named Youngest Pilot of Delta Airline was in 2017 and not...