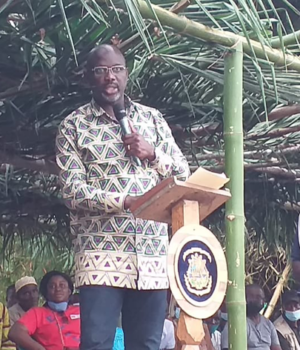 Claim: Without boasting our government has achieved what others did not. Some served twelve, some fifty-seven, some fifteen, some ten. Liberia is 173 years old. 170 years our country is been left alone. If you look at the history of this country, for the last three years you can see that there is progress, there is prosperity and there is peace.

Verdict: Incorrect, no former Liberian president has served for fifty-seven years or fifteen years as mentioned by Mr. Weah.

Claim: We have so many doctors and nurses who have gone away (outside of Liberia) to receive training to come back to help us because we believe that the health sector should receive help.

The Stage Media verification established that the government of President Weah has awarded studying opportunities to several nurses and doctors who are currently abroad specializing in various fields of the medical profession. In 2018 the government of Liberia through a rigorous vetting process selected and sent abroad 15 Liberian doctors to do their specialized training in several countries.

Claim: The government Pro-Poor Agenda is affecting everyone in our country positively.

Fact Check: The Pro-Poor Agenda for Prosperity and Development (PAPD) in October 2018 and is working with its development partners (DPs) in tackling the macroeconomic challenges, according to the UN Mid-term report on the Implementation of the Istanbul Programme of Action (IPOA) for LDCs (2011-2020).

The report states that the Government continues to institute measures to create an enabling environment that facilitates growth and poverty alleviation.

“The Government of Liberia has made progress in some of the areas, such as road construction, gender equality and women empowerment, and water and sanitation; however, overall progress towards graduation remains slow because of the prevailing macroeconomic challenges, and the impact of climate change, such as coastal erosion, flooding and changes in the rainfall pattern, all of which in several ways continue to affect the Government’s ability to generate the needed revenue to accelerate public sector investment.”

Also, the USAID Liberia 2019-2024 Country Development Cooperation Strategy report states that Liberia is far from the end goal of achieving self-reliance. Both capacity and commitment are at low levels, with capacity significantly lower.

However, while economic growth is a necessary condition for self-reliance, it alone cannot ensure commitment to principles and practices that are necessary for equitable socio-economic development.

“A close coordination with GOL and civil society, especially on land tenure, supply chain, governance, transparency, and accountability Foundation for Growth: A healthy, productive, and educated population with foundational rights for all for self-reliance will require increased entrepreneurship, quality education and health services, and increased GOL ability to finance its own development.”

Wasteful Spending? – Liberia Spent US$50K on Park but, Years After, it is...

True: Suspected Ebola Cases in Liberia But, Testing is Ongoing

Essay: Pandemic City: The Paradox of Geography and Vaccine

Beware, Youth Empowerment Fund is a scam On Facebook and WhatsApp