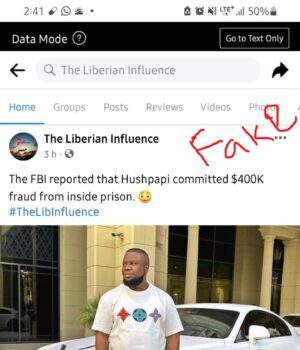 Claim: Hushpuppi Caught in $400K  fraud
Case while in US prison

Full Text: Social Media Users circulated a claim that Nigerian Instagram celebrity Ramon
Olorunwa Abbas aka Hushpuppi who is facing charges in the US for fraud is caught
in $400 fraud inside US prison.

The claim furthers that Hushpuppi  has receive fresh charges as circulated on
social media.

According to US Attorney On July 3, 2020,
the  America Federal Bureau of
Investigation (FBI) Federal prosecutors in L.A. charge Dubai
resident who flaunted his extravagant lifestyle on social media in a
wide-ranging conspiracy to launder hundreds of millions of dollars from
business email compromise (BEC) frauds and other scams.

The Nigerian Instagram celebrity tried to  steal £100 million (approximately $124
million) from one English Premier League soccer club. Though the FBI did not
name the club.

According to the FBI , Hushpuppi is one of the leaders of transnational
network that facilitate computer intrusions, fraudulent schemes (including BEC
schemes), and money laundering, that target victims around the world for
schemes that design to steal hundreds of millions of dollars.”

In October 2019 Hushpuppi  committed
one BEC scheme that defrauded one client lae firm in Newyork of approximately
$922,857.

Abbas, who is currently incarcerated in a California prison on charges
of money laundering, was said to have purchased Economic Impact Payments (EIP)
debit cards and used them to launder more than $400,000.

The claim is circulated by many social media users including one of the
Liberia’s largest culture and entertainment blog the
Liberian Influence and Wow
News Media,

The post by the Liberian Influence attracted 340 comments and 31 shares
and 780 reactions.

Verification: The Stage Media used reverse image and
found out that the claim was published by the Vanguard
News  and Pulse
in Nigeria.

Director of Public Relations, US Attorney’s Office L.A told the BBC that the document
circulated on social media is fabricated and the US  Attorney’s office in Los Angeles which filed
the  case against Hushpuppi has not filed
any document relative to the claim
circulated.

“We have checked with the FBI agent who supposedly author the document
, and he confirms it is fake,” Thom Mrozek.

Conclusion: Following the US Department of Justice
respond to the viral claim, it is sufficient to say that the claim is False.

Does corn silk cure diseases as claimed in this video?

Disability Is Not Inability