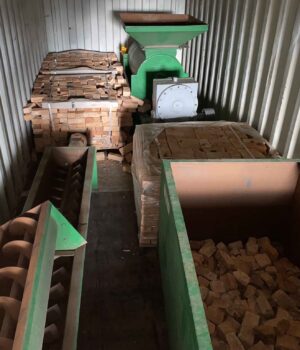 Palm oil is the world’s most widely used vegetable oil. Currently, most of the world’s palm oil comes from Southeast Asia, with Indonesia and Malaysia representing 86 percent of global production (Roundtable on Sustainable Palm Oil [RSPO], 2014).

Africa is increasingly viewed as an important frontier area for the expansion of large-scale oil palm cultivation as global demand for palm oil grows.

Oil palm development in the region has the potential to spur much-needed economic development, offering employment opportunities for rural communities and potential revenue for government programs.

Before and after Liberia’s civil war which lasted for nearly 15 years, the traditional production mechanism used by local farmers in rural communities is unable to produce the much-needed quantities of palm oil for the consumption of the country and for exportation.

Rural palm farmers will have to use cutlass to cut the palm from the tree, boil it by using a drum and thereafter using a stake to beat it before boiling the fruit again to produce the needed oil which will take them up to two to three weeks sometimes months to produce a small quantity of oil.

The lack of training in best management practices, including regular weeding, pruning, fertilizer application and planting of cover crops in oil palm fields are factors responsible for the low production in Liberia.

Smallholder farmers’ quest to process their fruit bunches into crude palm oil has been on the decline due to less efficient mills and sometimes unhygienic pits that are operated manually and require a lot of time and energy and also pose safety challenges.

Farmers are also encouraged by Solidaridad (A not-for-profit organization specialized in cocoa and oil palm development) to stick to a timely harvesting plan and create harvesting circles of a 1.5-metre radius around the palm to ensure easy picking of palm fruits during harvesting.

Solidaridad is making progress to help local farmers across the country especially in Grand Bassa County, District #2 graduates from the traditional oil palm processing method to the use of a modernized machine which according to the NGO will increase production by up to 20 percent.

The NGO with support from the Kingdom of Netherlands currently has begun construction of an oil processing mill in Coniwien Gbeal District #2 Grand Bassa County with the hope of helping local farmers increase from 15 to 20 percent in production.

Speaking at the construction site, Solidaridad County Representative Michael Doe said research has shown that using traditional methods to process oil palm leads to execrating only 9 percent of oil from the fruit which is far lower than using modern mail for processing.

“There is a research that says that with all those traditional methods we can carry on, the execrating oil rate is just 9%, but with the mail that will be introduced shortly the oil execration rate supposed to be between 15 to 20%.

-Meaning you will get more than two times what you used to get. It will make you sell more oil using a small quantity of palm.” Said Doe.

Solidaridad and Coniwein community and Local Farm have been working together for a long time, what we are doing here (the mill process) is one out of several in many places.

He said the purpose is to improve farmers’ income and the project is to teach locals how to grow and process their palms.

The Solidaridad Country Representative said Solidaridad will erect a modern mill “When the mill is erected and completed, the traditional way of making oil palm will stop.

“Today we visited two places. The first place way they used to fix the oil was by using a hole and most time that women can do it. Then we visited the other site, which is an improved version of the old place, but I can assure you that the modern mill will make you produce a huge quantity of oil.” Mr. Doe mentioned.

Elder Sammie Garjay, 70, is a local farmer and a resident of Coniwien Gbeal, said the work by Solidaridad is a massive development in the oil palm sector of the community.

“I started from 2007 and I still planting palm because I believe I can get something from there for me and my family. I informed Solidaridad that I want palm nursery because the way we were planting the palm, it was not growing until Solidaridad came to help us,” Garjay said.

I am very happy for the new machine (mill) that Solidaridad trying to build here, I will plant more because I know I will not suffer again. He continued.

Daniel Vorgar, 32, is a local farmer operating 60 plus tress of palm with the aid of Solidaridad.

“From the beginning, some of us were feeling weak but after two to three years now, we are getting to know the importance of oil palm not just to Liberia but across the world. With the aid of Solidaridad, I am now harvesting and when I harvest, I know what I can get from there,” he said

He said because of the huge benefits smallholders including him are generating, more people are getting encouraged to plant and that the installation of the mill will enable more people to get involved in palm planting.

“The traditional processing was very hard for us. We will have to boil the palm for two to three days before beating it. It was very hard to do but thank God for the new machine Solidaridad is erecting in this community.” It will really help us.”

“Let me let you know that the community is blessed and feeling impressed with the ongoing installation of the oil procession mail undertaken by Solidaridad.” He mentioned.

Solidaridad has promised to extend the installation of the modern mail machine to other places where the organization is operating to increase yield and add value to oil palm production.

Beware, Orange is not Celebrating 40th Anniversary, the Link is Fake

Motorcycle is the Major Transporter in Rural Liberia