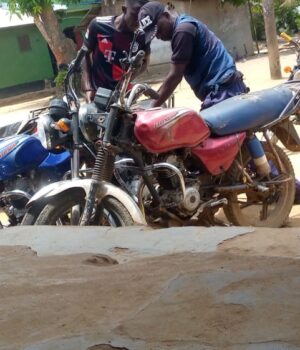 When commercial motorbikes began plying the streets of Monrovia; it was seen as a relief to many travelers, since there is a lone boulevard that connects the country’s capital city to surrounding routes.

The early 2020s saw an increase in commercial motorbikes, they plied at liberty without being stopped or questioned by state securities.

But, the freedom did not live long when the Liberia National Police(LNP) said armed Robberies and crimes were aligned to the riders.

The police later placed a restriction and introduced and enforced its 10 pm restriction on the movement of motorcycles in Monrovia and its environs and major cities in Liberia.

Motorcyclists have strongly spoken against the restriction on grounds that they do not make much money for the few hours they operate before night falls.

The cyclists have repeatedly called on LNP to allow them to operate their bikes freely without restrictions but such plead has fallen on death ears.

Notwithstanding, A Stage Media (TSM) investigation has established that members of the LNP have considered the regulation as their honeypots.

Some members of the LNP are owners of bikes and have given their bikes to be used as nighttime transporter without being seized.

Others who do not have police officers as their bosses to have nighttime clemency to operate [run traffic] at night are required to pay monthly free access fees at some checkpoints in Monrovia and parts adjacent.

“Prof, you have to pay due if you want to operate for we-, we- hours,” motorcyclists said when he was asked to cross the Du-Port Road Market police checkpoint at about 9:58 pm.

“I can only stop you around Renaissance and you will make your way from there because I do not want to risk my bike tonight,” he laughed faintly as he accelerated the bike.

TSM investigation uncovered that the police assigned at the Du-Port market police checkpoint are heavily involved in extorting money from cyclists who are booked at the 10 pm regulation.

A former aid of the police who asked not to be named said, “When I used to go there some nights we can take it with more than 15 or 20 bikes.”

The phrase “We can take it” as used according to him implies the number of bikes they confiscate per night and what is expected to be received when all those bikes are free.

Additionally, TSM uncovered that each bike arrested reportedly pays the sum of L$1,500 or more to have their bike released.

A fellow who never had much money to have his bike free from the hands of the police was left with no option, but to remove his sim card from his phone and gave it to police officers assigned at the Du-Port Road market checkpoint to enable him to carry his bike home.

A lady who sells at the Market (asked for anonymity) at night said she always observed the movement of the LNP and the cyclists.

She said, “I am always here and know how the police can be doing pick and choose among the motorbike boys.”

She added, “Sometimes, some of the boys can be running from the police and make serious accidents.

She recalls an incident when one of the riders fell in the drainage along with the market because he was escaping the police.

When she was asked what has been her intervention since, in fact, she is an elderly person, the woman said, “My son, I do not have red shoes to go to Tamba Court.”

“I have been hearing this, from many cyclists and I have made interventions many times. But the way the police is now is highly political so I want to be very careful”

National president of the Motorcycle and tricycle Union of Liberia A. John F. Kenyor, said, riders are asked to not ply the street but just in case they are caught in the restriction period, Police officers should detain them and later set them free but not extort money.

“I have always told motorcyclists not to run traffic at the night but in the case that they are arrested, the best thing the police can do is by detaining them for a few hours and have their bike released after the hours and not to request such a huge amount from those poor motorcyclists.”

The cyclists Union President said police action toward his members is unbearable now and the union has decided to put up a non-compliance posture with the leadership of the LNP.

According to him, since some of his member’s bikes were seized during the Christmas break celebration, officers have refused to release those bikes.

Kenyor said some of those whose bikes were confiscated have complained that they have been asked to pay the sum of US$200.00 before they can have access to their bikes.

“I told the police leadership that I will not attend any meeting with them again until my member’s bikes are free,” he said.

“When the CEO himself is outside, it is time for serious operation; we do not make fun,” a Police aid said.

Police Aid is deployed at strategic points before reaching the main checkpoint at the Du-Port Road Market.

One of the aids is found before the former business Center-Renaissance- [a popular entertainment center on Du-Port Road]; another is at the Bishop Matthews’ High School junction, while others are on the side of Zuba Town and the Main Market from the Better Days end.

Because of this, the police aids are vigilant when it comes to arresting bikes.

Once a bike is arrested, it is placed in the drainage waiting to be carried to the Shara Police station where the rider’s fate is determined by either an officer of the police or aid only identify as Parpa.

At times, the officers are seated at an entertainment center named “Wrong Turn” or “Block D”, a place they use some of the funds collected from the cyclists to party all day.

These aids are not uninformed but there is one objective, to arrest bike riders and hand them over to uniformed officers of the state.

TSM investigation revealed that those police aids work on commission so the more bikes they can arrest during the night determined how many dollars they will carry home the next day.

It is also established that when the CEO himself arrests a bike or orders for it to be taken to the police station, the charge is different from when OPS D or other officers do the arrest.

Another motorcyclist who has gone for his bike during the early morning hours of March 28, 2022, could not leave because the amount requested by officers could not be paid.

“OPS that is the only money I have now,” he pleaded for his bike to be released.

In a few minutes one of the officers known as Mulbah or OPS as he is called reached out to the fellow and charged his pockets to verify if the statement by the rider was true or not.

He took out some money from the rider’s pocket, counted it, took some unspecified amount out, and handed the rest over.

The fellow insisted that it was his weekly report money and that he cannot afford a cent being deducted.

Upon saying those words, Mulbah said, “This dog gets [has] living money in his pocket and he standing here begging for five hundred dollars.”

“Do not release his bike” he ordered as he walked away towards a porch at the back of zone five depots 3 in the Shara Community in Paynesville.

Authorities fired Kowo and opened an investigation into the death. One account of the events suggested Selleh died as a result of stones thrown by friends who came to his defense.

Sergeant Kowo (who originally fled the scene) was arrested and charged with murder.

The case started at the Eighth Judicial Circuit Court in Sanniquellie, Nimba County, during the August Term of Court, the former sergeant’s plea for a change of venue was granted, and the case was pending transfer to Grand Bassa County at year’s end.

The constitution and law prohibit arbitrary arrest and detention and provide for the right of any person to challenge the lawfulness of his or her arrest or detention in court.

What did the Police say about the money collected?

Officer Tisdell is the Chief Executive Officer (CEO) of zone 5 depot 3 situated in the Shara Community.

When CEO Tisdell was contacted about their department at the Du-Port Road Market, he said, “Go and ask 122 he will tell you if running a motorbike at night and you are arrested is harassment,” he said as he walked away.

Carter said those officers who are in acts that are inimical to the LNP should be videotaped and presented same to the authorities of the LNP to aid them in their investigation.

“When there is no evidence, it is difficult to deal with it because the officers will deny it,” he told TSM in an interview.

Although the cyclists have complained that money has been taken from them under duress, responding to issues raised, Carter said, those cyclists who are paying the money to the police officers are conniving with them[officers].

The Liberian government has not been able to track funds extorted from riders as Officers of the Liberia National Police see this act as a boiling pot for them thus enriching themselves to the detriment of motorbike riders.

No, LPRC Building Is Not The First Administrative Construction Own By The Entity

True: Taking Pain Reliever After or Before Covid-19 Shot is Risky