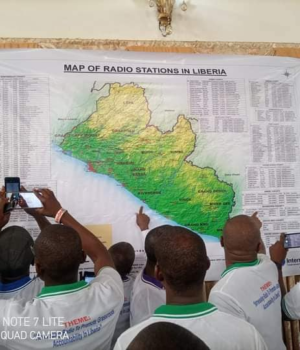 Monrovia-
As part of its media law reform effort in Liberia, USAID Media Activity managed
by Internews, and a consortium of local media partners seem to be well on
course to ensure a national policy instrument is developed for the governance
of Liberia fast growing community radio sector. The legal environment in which
the media operates is very essential to ensuring that the media is free and
independent.

Many sectors of the
Liberian media have no well-defined legal instrument to guide their work
thereby creating hinderances in the work of these sectors.

One of the largest
sectors of the Liberian media is the Community Radio Sector as Community radio
stations are spread throughout the country but with no legal framework to guide
the work of the sector it is becoming an impediment to the growth of the
sector.

USAID Media Activity
project has as one of its core objectives the development of media laws for
legal reform of the media environment and it is prioritizing the Community
radio sector as one of the key parts of the legal reform process of the Liberian
media.

Creating the enabling
environment for the media to carry out its core duty is one of the fundamental requirements
for free press, freedom of expression and the right to be heard.

Without a good legal and
regulatory environment characterized by friendly laws, policies, the work of
the media could be undermined, and media freedom and the right to free
expression suppressed.

With vast majority of the
Liberian population illiterate and heavily reliant on radio for information due
to poor circulation of newspapers and lack of other sources to obtain
information, the Community Radio Sector is more accessible and serves as a relevant
source of information for the larger portion of the population.

To jumpstart this effort,
Internews with funding from USAID along with other partners including the Press
Union of Liberia (PUL), Female Journalists Association of Liberia (FeJAL),
Association of Community Radio (ALICOR), CEMESP and other media partners held the
first public consultations for the formulation of a Community Radio Policy recently
in Buchanan, Grand Bassa County.

A draft Community radio Policy
was first crafted in 2008 and Internews and partners have taken the lead to provide
the platform for stakeholders including regulatory bodies, the Government, civil
society organizations, managers and senior personnel of Community Radio
stations across Liberia as well at Press Union of Liberia, FeJAL, CEMESP to
discuss and make meaningful inputs into the draft policy.

From February 15, 2022, the
first stakeholder’s consultation was held in Buchanan, Grand Bassa County and
brought together a large number of stakeholders who discussed and proposed
major changes to the Draft Community Radio Policy.

With representations from
Community radio stations from the fifteen (15) counties the first stakeholders’
consultation was very interactive as it provided the Community radio personnel
to discuss the policy that is expected to govern them.

Making remarks before the
start of the Stakeholders’ consultation, Representative Ivar K. Jones, Chairman
of the House Standing Committee on Information and Broadcasting underscored the
importance of radio especially Community Radio Stations in Liberia.

He said although there is
the state-owned Liberian Broadcasting System Community radio stations across
the country play a key role in reaching out to the people with relevant news
and information.

Representative Jones
applauded Internews and partners for the initiative saying it is essential to
maintaining peace and democracy through reliable source of information.

He pledged the support of
the National Legislature in working with partners to have a policy to govern
the Community radio sector of Liberia passed into law.

Said the Lawmaker, “Let
me again reassure you that we from the Legislature stand ready to support your
dream. I have been speaking with PUL, we are still awaiting whatever
communication or bill the PUL has for us to push on the floor”.

Also, the Chairman of the
Law Reform Commission, Cllr. Boakai Kanneh recognized the importance of
Community radio stations and the level of work they do in informing the
population.

“I took time to come here
because it is very important, especially when Community radio stations are
getting many. There is a need for some form of regulation”, said Cllr. Boakai.

The Law Reform Commission
Chairman said although the radio sector is being regulated by MICAT and LTA
there is a need for polices that will govern the activities of the Community
Radio sector.

“The need for a Policy is
more compelling now with many Community radio stations propping up and also
political ownership”, Cllr. Kanneh added.

Internews Liberia Chief
of Party, Lien Bach expressed thanks to stakeholders including the Law Reform
Commission, the Liberian National Bar Association, members of the National
Legislature and others for attending the first stakeholders’ consultation.

“Without policy to govern
the Community radio sector, it is not good, and we really hope that this
exercise will lead to developing policy that will promote our work”, said Madam
Bach.

“This is the start, hope
we all will be engaged moving forward. No matter what is given you by donors,
it is not sufficient, but it should be a local driven exercise and I hope to
see you in the next round”, the Internews Chief of Party noted.

Providing an overview of
the Community Radio Sector and the Draft Community Radio Policy, Jefferson T.
Massah, Senior Media Advisor of Internews Media Activity said the first USAID
sponsored project worked with many stakeholders and one of the major outcomes
was the passage of the Kamara Abdullai Kamara Act.

The Internews Senior Media
Advisor said those invited should give their expert opinions as well as
community radio personnel making good inputs into the draft policy.

Providing some details,
he said a recent Internews assessment revealed that there are 165 radio
stations across Liberia indicating that political ownership of some Community
radio stations is something that is even making the need for a Policy to govern
the sector a matter of urgency.

The first stakeholders’
consultation led to the participants making contributions and suggesting several
changes to provisions of the Draft Community Radio Policy.

The process is expected
to continue with another consultation to be followed by a validation of the
draft policy before taking it to the National Legislature for legislative
action.

Internews Libera with
funding from USAID is supporting the initiative as part of a five-year USAID
sponsored Liberia Media activity project.

The project is seeking
support to media development, media law reform, capacity building, amongst
others.