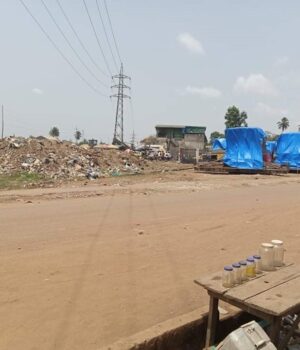 On June 30, 2015, the Government of Liberia through the Paynesville City Corporation (PCC) showed a US$50,000.00 garden park project at the Du-Port Road Junction intersection.

With ten large sub-communities, Du-Port Road has an estimated population of 114,321 residents.

The genesis of the Du-Port Road Junction Park was conceived during the dedication of the ELWA Junction Beautification Project in June 2013 when former Liberian President Ellen Johnson Sirleaf emphasized the need to replicate the same at the Du-port Road Junction.

The intention of the construction of the park by the Paynesville City Corporation (PCC) was to beautify the city.

The park was sponsored by the National Social Security Corporation (NASSCORP) at the cost of over US$50,000.00

But fast forward, in 2022, the park is demolished by the Ministry of Public Works due to the ‘current construction of the ongoing road project.’

The George Weah led administration alleged that the demolition of the park was due to the expansion of the road project despite thousands of United States dollars of taxpayers’ money invested in it.

The park before being demolished was used as a dumpsite for residents including disadvantaged youth (Zogos).

The now-demolished pack was neglected for the fact that there was no regular maintenance carried on by PCC but was rather used as a dumpsite where garbage was brought from various locations and dumped, at the over US$50,000.00 park rather than being used for recreational activities as the initial purpose of construction.

Jeremiah Diggen, PCC Communication Director in an interview with The Stage Media (TSM) linked the demolition by Public Works to what he termed as “massive road construction the government is undertaking along that route.”

“The Coca-Cola factory road project is in full swing and the park is within the constructional area, so it has to be demolished,” Diggen said.

According to Diggen, at the time the park was constructed, the city authorities did not anticipate that it could have been affected by the current road construction adding, “the demolition was necessary for a development that is more essential than the park.”

“At the time of the construction of the park it was important, but as the years go on things change, and the park does not represent the reason for which it was constructed therefore development has to overshadow the park,” Diggen said.

When asked whether the construction of the park was wasteful spending, Diggen said, yes.

“When development is taking place there are times other structures that people spend money on are demolished to carry on a more important thing.

“Haven’t you seen people demolish two-story buildings to build five stories; these things happen all around the world. So, the road construction that will benefit almost thousands of people as compared to the park has to prevail,” he indicated.

“You as a journalist know that place currently does not represent a park, the area is kind of dangerous; even if it does exist, where will people visiting the area pack their vehicles? Will you be willing to carry your children to that place while construction is taking place? So, you see the location of the park was not just suitable that is why it was demolished to carry on the road construction,” he stated.

On May 2, 2017, it was reported by FrontPage Africa that the Ministry of Public works was in the process of demolishing the park, two years after it was constructed, for allegedly failing to follow the zoning laws contrary to Diggen’s statement that the park falls in the construction area hence reason for it being demolished.

The newspaper article quoted the Ministry of Public Works, “the municipal government of Paynesville did seek Public Works’ advice before carrying out the construction and therefore, violated the zoning laws.”

The PCC, according to the Public Works’ source, would receive compensation for the demolition as usually done with victims of demolition.

When contacted, former Mayor Cyvette Gibson refused to speak on the issue despite numerous efforts. Madam Gibson said she is out of Liberia; hence, she cannot say anything regarding the matter.

At the same time, several inhabitants of Paynesville have expressed frustration in the continued waste of taxpayers’ money which some blame on lack of coordination amongst government institutions relative to the implementation of projects.

“For me, this only demonstrates the lack of coordination within the government,” Mulbah Kesselee, a bike rider at Du-Port Junction said.

He added, “Had there been coordination, I don’t think PCC would have built this structure here in the first place; such fund could have been diverted to something else that would benefit the greater good of the country.”

Jestina Butler, a student of the University of Liberia, who also sells provisions at the junction during the evening hour said the failure on the part of public officials not to follow the zoning law is one of the major problems confronting the nation has faced.

According to her, until that is addressed, the nation will continue to spend wastefully.

“I cannot say much because the place has already been demolished and no amount of words can undo that, we can only hope that this serves as a wakeup call so that before the project of such can be implemented, there should be engagement so that we do not keep wasting money,” Butler said.

Former District No. 4 Representative Henry Fahnbulleh says  “I feel terrible! That such vibrant project was demolished.”

Meanwhile, Abraham Momolu, a resident of Duport Road said he has no problem with the demolition of the park on grounds that it was never benefiting the people of that City.

“We witness the park being taken over by dirt and grass, so if it was demolished to bring a development that is more impactful, I do not see any problem with that,” he added.

False, Covid-19 Vaccine Not For Sale

The Happy Few’s Happy Places: How Liberian politicians and officials escape accounting for their...