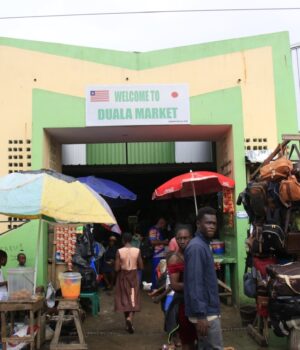 The Duala market is one of Liberia’s most significant selling points (commercial hubs) as it hosts marketers from the former Red Light market, citizens from Bomi and Grand Cape Mount counties, and of course, those who live in the vicinity of the market.

Due to the nearness of the market to the main road, Liberian President George M. Weah saw the need to build a “contemporary market” structure that would host the number of marketers that was increasing by the day and to as well help depopulate the main streets for a free flow of traffic.

Grounds were broken on October 13, 2020, and said program saw jubilant marketers who saw the construction of said market would have relieved them.

The 4.3 million market was dedicated on February 10, 2022, at an elaborate ceremony as marketers were seen in a joyous mood, dancing and thanking President George Weah. The latter told them to leave the sidewalks selling as it was unsafe for them.

It has been nearly eight months since the 4.3 million United States Dollars project was turned over to marketers, but from the day of said dedication, the expected dream to have them off the streets is far from realization.

During the dedication, President Weah called on the marketers to ensure that the place was clean and that selling in the street was no more done, but marketers must start selling their goods in the building.

At the ceremony, the head of the Liberian Marking Association of Liberia (LMA), Madam Alice Gordy Yeebah, committed to the Liberian leader that they would have taken care of the newly constructed and dedicated market in the New Kru Town, Montserrado County, electoral district no.16

What has happened in less than eight months?

It has been not more than eight months since the market was dedicated.

The one-time nice-looking structure front has changed as vast piles of filth have taken over the area.

Some marketers have left the modern market building and started selling on the streets as before the new market hall was constructed.

Our reporter who visited the area in recent days said marketers are seen seated near a massive pile of garbage placed in the streets by them (marketers) and residents near the market grounds. It was also observed that they have left the market and are now seated on the streets to sell their merchandise.

One of the sellers is Ma. Sarah is a lady who sells on street corners.

In an interview, she said the Liberia Marketing Association (LMA) forced them into the building when it was turned over in February of this year.

She quickly said they could not fit in the building, leaving them with no option but to sell street concerns besides the garbage.

Ma-Sarah claimed that they paid fees to individuals who agreed to clean the massive pile of dirt but said those people have not made good their words.

She added that even though those people did not live up to their promises, they still collect fees from them daily to clean the area.

According to information gathered from the market, those marketers are outside the building due to a lack of tables or space in the newly constructed Duala Market.

Annie, another sidewalk seller, said she was outside the market because she did not have a table in the building. When the LMA tried to force everyone into the building, they received threats from people who claimed ownership of the tables.

According to Annie, one of the widespread threats they gave was by saying, “If you want Gowah, sit on this table.”

‘Gowah,’ as used, is a condition caused by traditional means that causes leg inflammation. This condition leads to death if the victim does not have a more potent traditional healer or if God does not intervene.

The threats are coming from those who have claimed tables because most of them alleged that they pre-paid for their tables, with some even having more than a table leaving the majority of the marketers without tables, a condition which has caused them to stay on the streets.

All efforts put in place to keep the streets of Duala clean are to no avail because the garbage has taken over the streets, and the marketers have to push the trash to find space to put their goods and sit by the pile of junk to sell to make ends meet.

Speaking to authorities of the LMA, the Public Relations Officer, Mr. Morris D. Brown, said that the marketers are too stubborn, “The LMA does not have the manpower to remove them from the streets; therefore, we are waiting for the government, especially the LNP to help the LMA because we can’t do it on our own” he continues.

There are enough spaces in the building, but most street sellers feel that people will get to them first if they are outside on the road, which is terrible for them.

He further confirmed that marketers were charged Ten United States Dollars to secure a table in the building, and those who paid more than that amount did not pay to the LMA.

Beware, Youth Empowerment Fund is a scam On Facebook and WhatsApp

One Year On – No Action of DNA Machine, as SGBV Cases Rise